Men wear mustaches and smoke constantly, in every public place. In a restaurant one evening, I realized that the crooner on the stereo was Julio Iglesias. An estimated twenty thousand people were killed, but as counter-insurgency the operation was resoundingly successful. At the time of the Hama operation, there were portraits of Hafez all over the country. He was quiet, studious, and apolitical; he attended medical school, then left for London to pursue an ophthalmology residency.

His older brother, Basil, was the heir apparent, but, in , he died in a car crash.

2. "How much do you make? And is this you only source of income?"

Still, he kept a low profile, until , when Hafez died. Within days, he was made head of the armed forces and of the ruling Baath Party. He was thirty-four, six years too young to be President, so parliament lowered the eligible age, and he was elected to a seven-year term, as the sole candidate. In , he was elected again, winning ninety-eight per cent of the vote. In office, Bashar presented himself as an unassuming family man and an advocate of transparency and democracy, and he spoke out vigorously against corruption; a former chairman of the Syrian Computer Society, he authorized limited access to the Internet in But he has made no essential changes to the status quo.

Bathhouse - The Escort I met

He has imprisoned dissidents, journalists, and human-rights workers, and his secret police torture suspects with impunity. He and Maher are increasingly despised in Syria. The Baath Party has held power since , in large part by maintaining aggressive domestic surveillance.

At the Sheraton Hotel, unsmiling men in long fake-leather coats are permanent fixtures. In pairs, they sit silently in cars in the parking lot and on couches in the lobby, staring unabashedly at strangers. Syria is one of the most insidious police states in the world, modelled on the old East Germany, with a pervasive network of informants. Last March, in the city of Deraa, a group of schoolchildren, who had been caught scribbling anti-government graffiti, were taken into police custody and tortured.

As the story spread, Syrians, swept up in the fervor of the Arab Spring, broke their silence to demand political reforms. Assad promised a series of gradual concessions, which he said would culminate in a revised constitution. Meanwhile, across the country, his security forces killed and detained and tortured hundreds of unarmed protesters. In some cases, the mutilated bodies were sent back to their families as a warning.

Refugees poured across the border, into Lebanon and Turkey. Over the summer, officers and soldiers deserted from the Army, and a low-level armed rebellion began to coalesce. From bases inside the country and in Turkey and Lebanon, the rebels declared the formation of a Free Syrian Army, and began launching attacks on regime forces.

As the peaceful protests turned into an armed revolt, people started warning of civil war—an alarming prospect in a place as factionalized as Syria. Assad leads a secular regime dominated by the Alawites, members of an offshoot sect of Shiite Islam. Sunni Muslims make up the large majority; the rest are an imponderably complicated mixture of Palestinian refugees, Druze and Bedouin tribesmen, Kurds, Armenians, Circassians, Turkomen, and a few dozen remaining Jews.

Throughout the region, nations took sides based on religion; the Shiite-led governments in Iraq and Iran supported Assad, while Sunnis in Saudi Arabia, Qatar, and Turkey insisted that he leave office. It is, for many, a proxy conflict. The Arab League, fearing an enormous conflict, suspended Syria from membership in November and later called on Assad to step down.

Instead, he heightened his attacks. Late on the night of February 3rd, the Syrian Army launched a barrage of rockets, tank shells, and mortars into a rebel neighborhood in the restive city of Homs, killing scores of men, women, and children. The next day, China and Russia vetoed a U. In addition to Homs, where about a third of the city is in rebel hands, there is combat in half a dozen other cities, and in towns and villages in the countryside, especially along the Turkish and Lebanese borders.

More than six thousand people are dead; tens of thousands have been arrested, including children; and nearly a hundred thousand have fled their homes.

With dozens more dying almost every day, Syria is sliding into a vicious civil war, but Assad has given no indication that he will relinquish power. The town of Zabadani sits in the mountains twenty miles northwest of Damascus—not far, according to local tradition, from where Cain killed Abel. It is a pretty enclave of forty thousand people, close to the Lebanese border, and in recent decades it has been a summer resort, where wealthy Damascenes build villas and Gulf Arabs go to escape the summer heat. Since last spring, the Syrian military had struck there several times, killing about a dozen protesters, as residents fled into the mountains for safety.

The local Baathist government reduced its presence to a few buildings at the edge of town, and the F. No one seemed sure what to make of it. The Arab League had been allowed to launch a modest observer mission to Syria, and on January 21st I joined a delegation that was visiting Zabadani. The town overlooks a river valley with a patchwork of cherry and apple orchards, where new villas and farms have begun to spread. Across the valley, a high, barren ridgeline was blanketed with snow. We pulled up in front of a municipal building protected by sandbagged barricades and armed soldiers, and the military hastily ushered in the observers, a dozen Algerian, Sudanese, and Moroccan diplomats.

A few shops were open, but shopkeepers and passersby stared quietly, disguising their loyalties. The building, the local Baath Party headquarters, had been occupied by a Syrian Army contingent, the last representatives of the regime in Zabadani. Below a huge portrait of Assad, the Army commander explained the situation in a tone of diplomatic opacity. The truce was apparently negotiated through an influential local member of the Baath Party, with contacts on both sides. Excited young men and boys thronged the street, shouting.

They said that government troops had come in a week before and, for three days, had fired on the town with tanks, rockets, and heavy machine guns. After you leave, they will come here. They needed protection of some kind; the rebels claim to have forty thousand soldiers nationwide, and the Army has half a million, including reservists and militias. There was gunfire in the distance. Army tanks, we were told, were waiting half a mile down the road.

In the adjoining town of Madaya, a group of rebels greeted us at a house where they had made a base.


The rebel army was a decentralized, amorphous organization. Though it was ostensibly linked to the Syrian National Council, a political body of exiled dissidents, it operated on the ground more like a series of armed Occupy Wall Street groups, built around soldiers who had defected from the Army and found sympathizers at home. It cannot allow us to have a free zone.

The Implosion | The New Yorker

When I asked him why, he smiled thinly and waved his hand. A young man named Anas said that he had been finishing a law degree in Damascus, but because of the unrest he had been unable to take his exams. Anas calculated that fifteen people had died in Zabadani during the attacks. In mid-July, he and a friend named Shahi had run from the troops during an assault on the town. Anas was captured, and taken away to be interrogated.

He was held for thirty-six days and beaten badly, he told me. He was lucky. Shahi was shot dead. Before the observers left, hundreds of townspeople gathered in the main square to shout slogans and call for freedom. Last summer, as the uprising gathered force, Assad made a televised speech. But we can strengthen the immunity of our bodies.

What is happening is sabotage. In late January, the Information Ministry organized a press trip to the embattled city of Homs. In a walled concrete yard at the military hospital there, a brass band waited next to a group of officers, standing at attention and holding large wreaths. 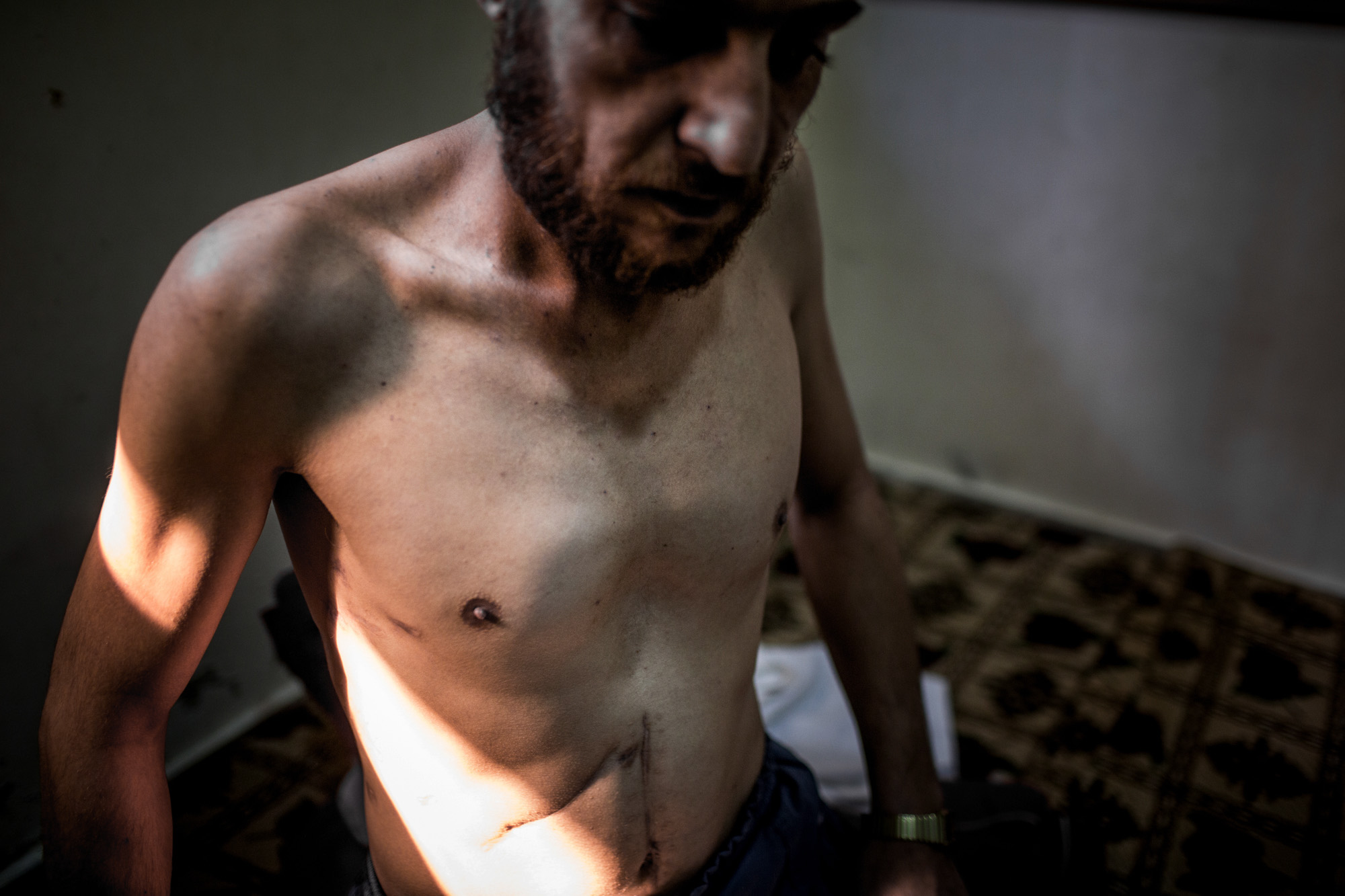 On the ground were three flag-draped coffins. A group of doctors and nurses had gathered, holding small Syrian flags. Next to them were women in black clothes, the widows, mothers, and sisters of the men in the coffins. 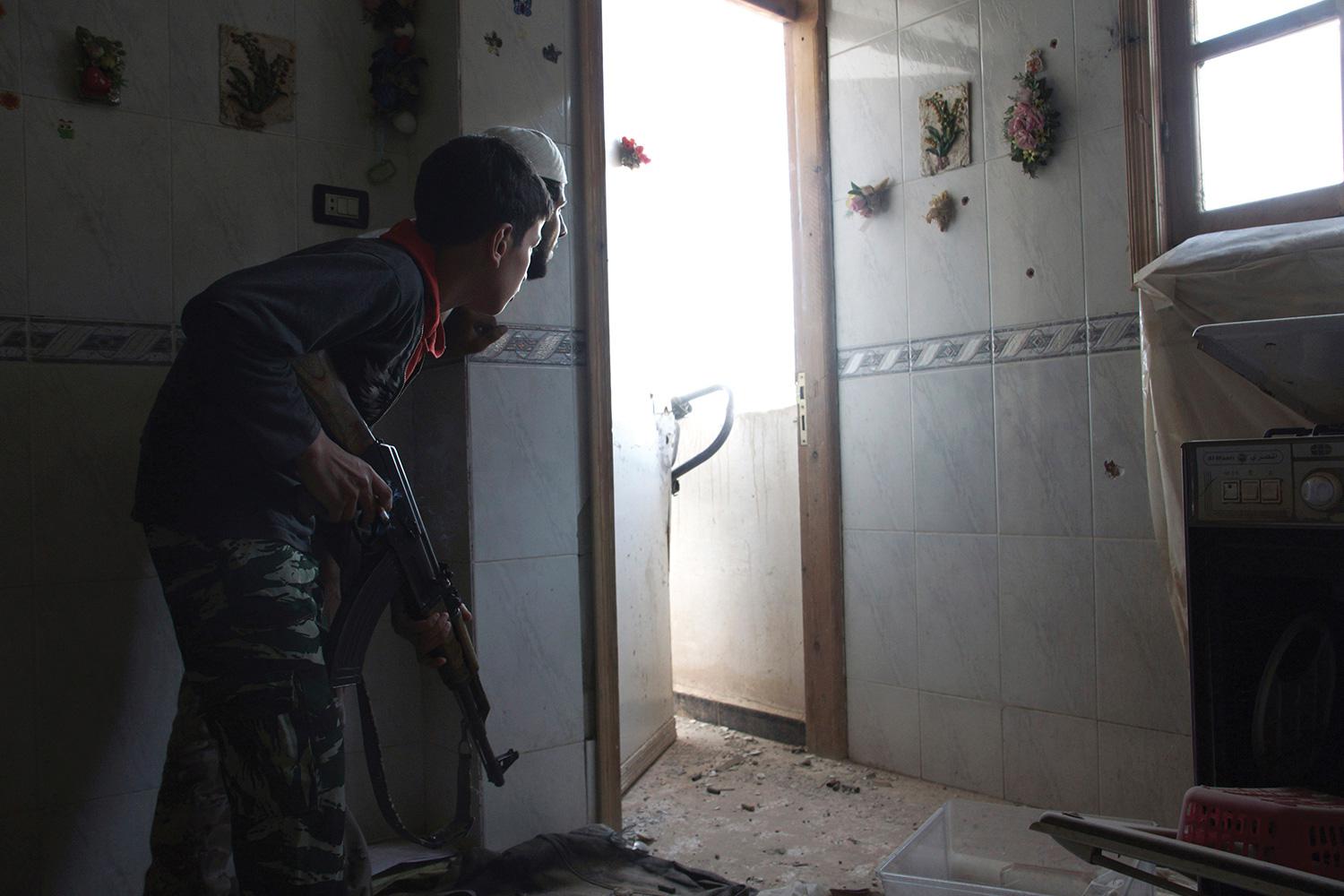 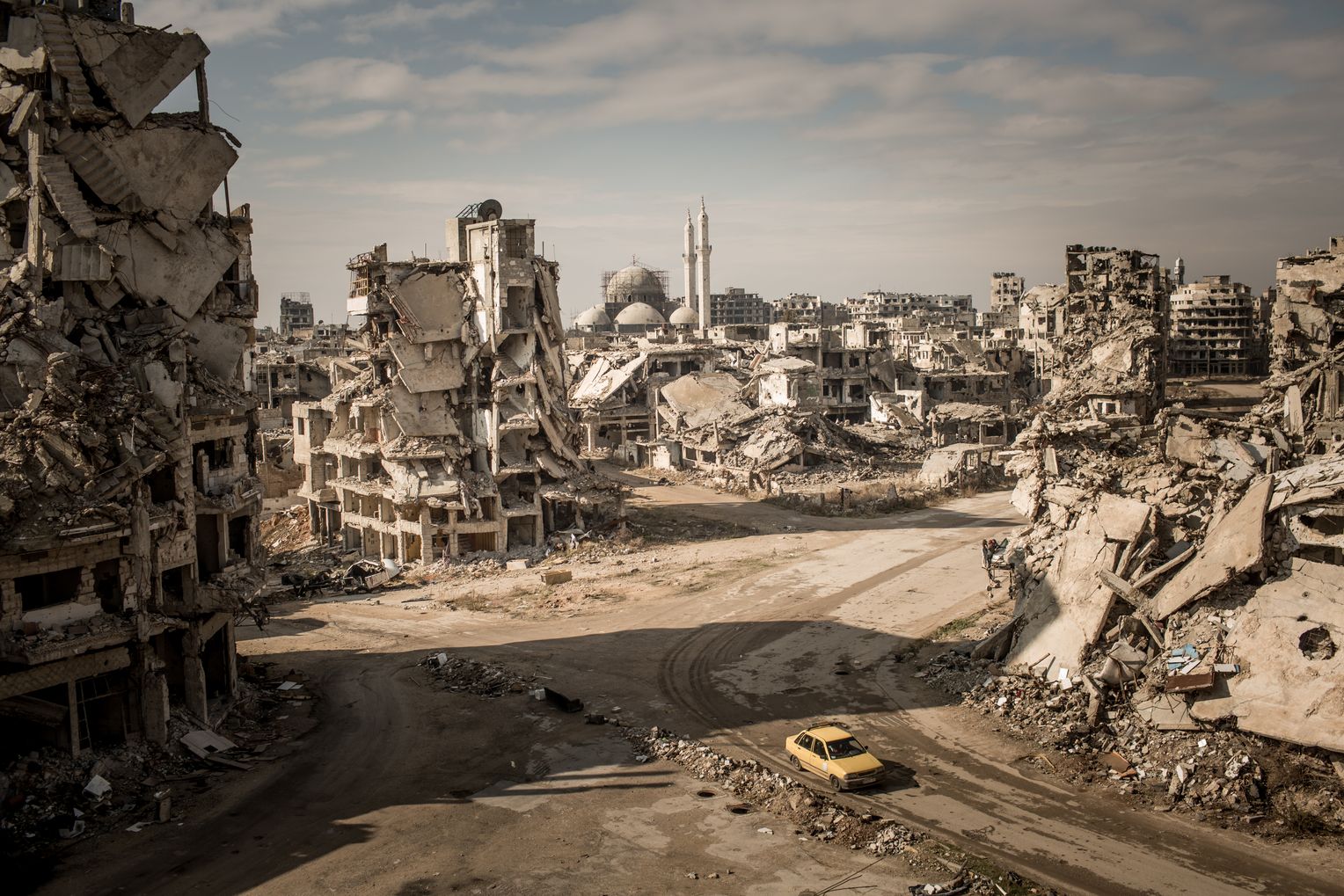 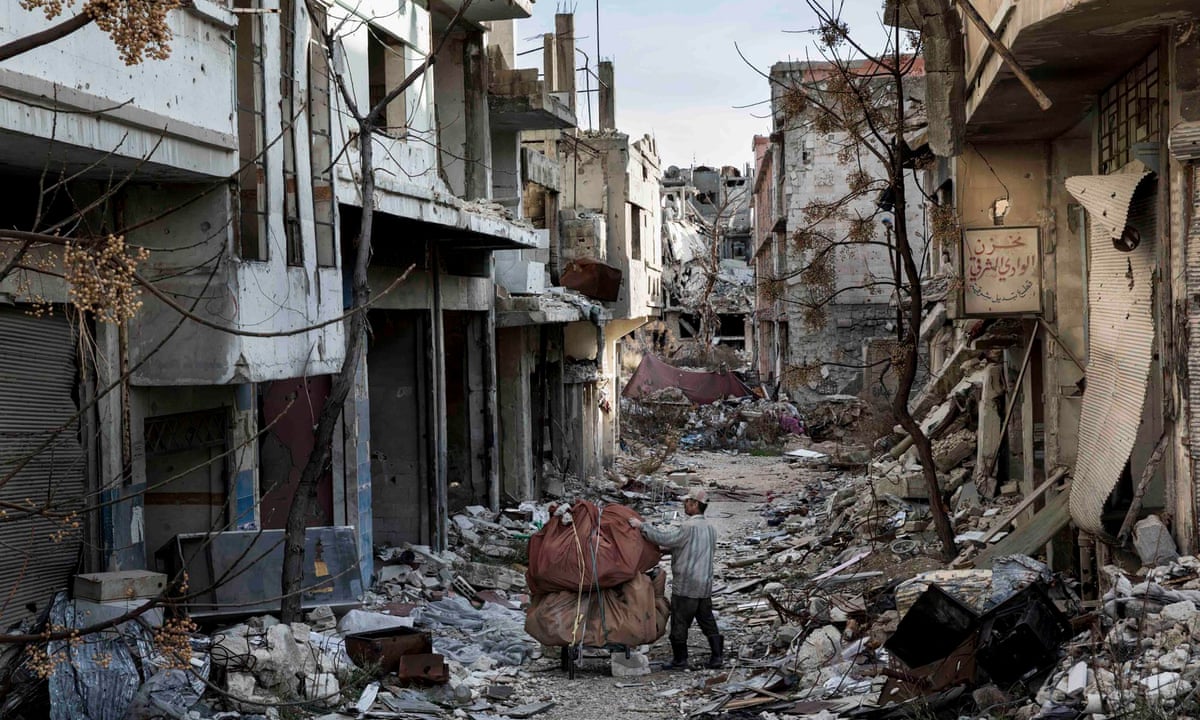 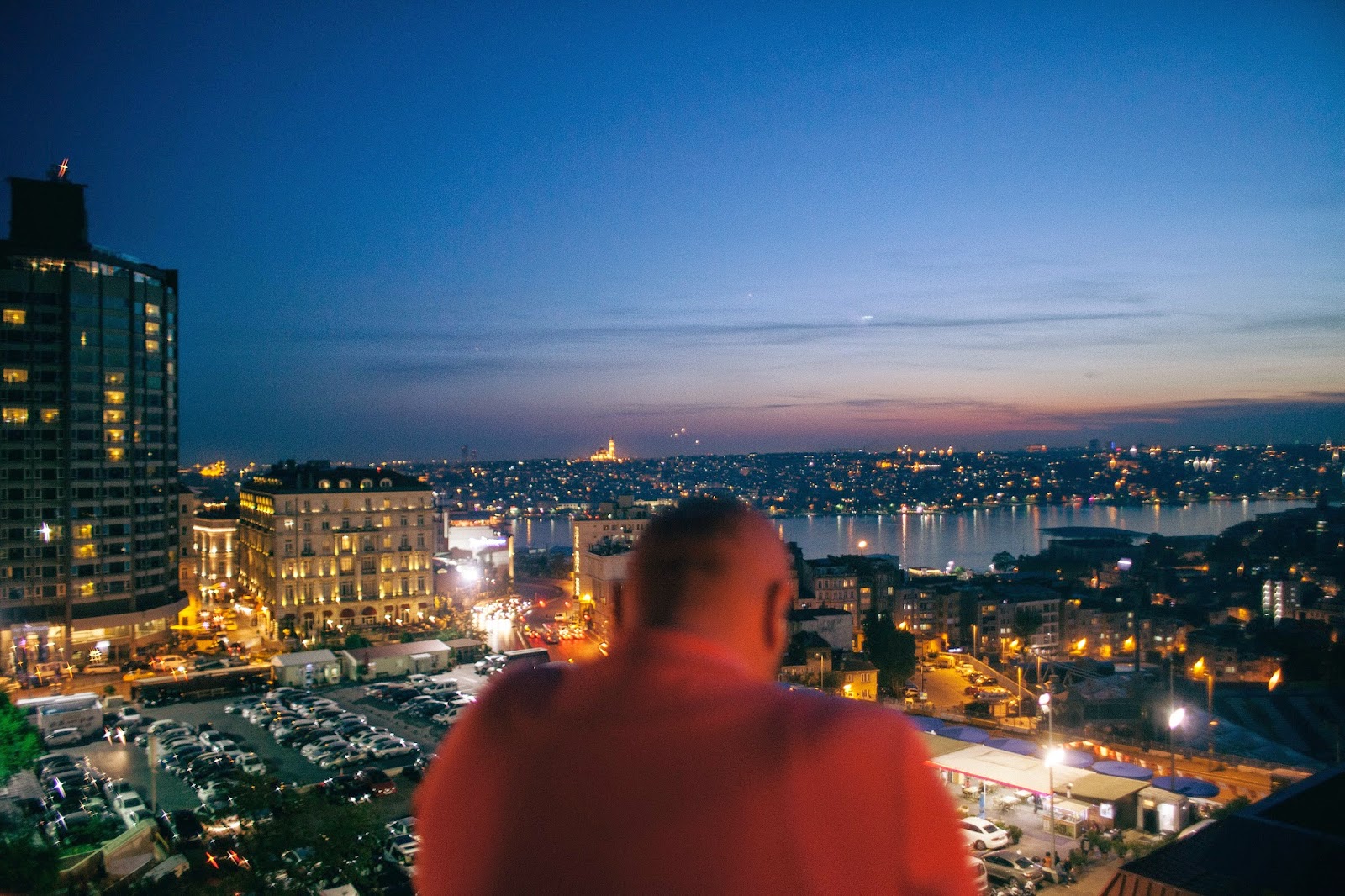